Long Beach Island, on the southern coast of New Jersey in the United States, has been the site of a weekend medium wave-oriented DXpedition held every autumn since 2002. Started by several east-coast DXers, it has attracted attendees from New York, Connecticut, New Jersey, Pennsylvania, Iowa, Maryland and Virginia. For the first 15 years the DXpedition was held in a beachfront motel in the town of Ship Bottom NJ, approximately 30 miles north of Atlantic City and 50 miles east of Philadelphia PA. In 2017 it moved to a private house across the bay in Beach Haven West.

Location of the LBI DXpeditions

Long Beach Island itself is a very narrow strip of land about a mile off the coast and features a state park and famous Barnegat lighthouse at its northern tip. The island is a popular resort in the summer for nearby New York City and Philadelphia residents, but in November many fishermen can still be seen casting their rods into the surf in search of bluefish, stripers, and other catches. The Drifting Sands Motel, our "DX Inn", is a popular location since it's one of the few beachfront accommodations on the island. The Drifting Sands remains open all year, and underwent extensive renovations in 2004 including the addition of Internet access in the room. Several nearby restaurants and convenience stores means that we don't have to sacrifice comfort in search of exotic DX opportunities! 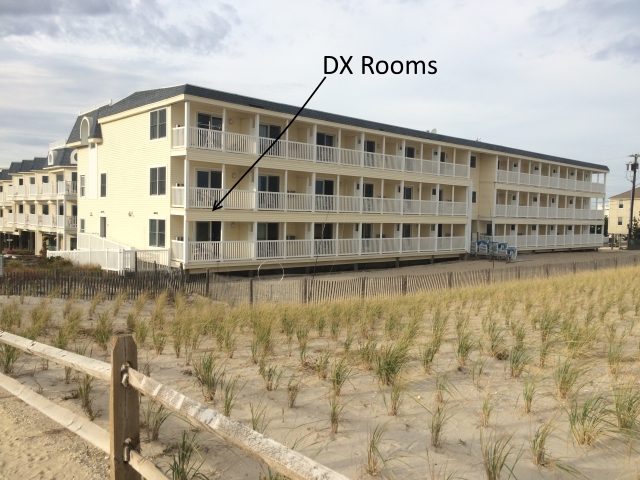 Prior to hurricane Sandy in 2012 we typically deployed ~800 foot beverage antennas on the beach along the base of the N-S dune fence but, due to beach restoration work, that has since become nearly impossible. In 2004 we added a Mark Connelly-designed rotatable six-foot broadband loop to the mix of antennas. While the strength of the signals from the loop was much lower than the beverages, it was better able to reject domestic stations and provide clearer reception of the Middle East and Europe. In 2005, we added a DX Engineering RPA-1 amplifier (recommended by Mark) to the BBL, and were quite happy with the combination. We also added a sloper, stretching from a third floor room to the beach and aimed towards Africa, but didn't see any appreciable reception in the intended direction; this could be due to the fact that the feed point was at the high end of the antenna and subsequent experiments with that configuration proved unsuccessful. Other loop configurations have been tested such as a 2 foot copper pipe loops, an 8 foot terminated "CB whip antenna" loop and Bruce's novel 2007 "alumiloop" made from window frame hardware. By 2013 (after several years of experiments) we switched exclusively to small and large single-turn loops set up nearer the motel building. Our typical complement of antennas includes a 6-foot BBL, several 1-meter diameter Wellbrook 1530's and one or two 16' x 36' corner-fed superloops with Wellbrook amps. While these antennas don't provide the tight patterns of the beverage, they are much easier to deploy and allow this aging group of DXers to have a more leisurely setup and tear-down process. When we moved to the house across the bay (~ 2 air miles from the beach motel) in 2017 our space for antennas was compressed, so we deployed a Europe-pointed 16' x 36' BBL and a southern version of the same loop. Our results from that location seem to indicate that these antennas perform as well as when located at the beach. In the 16 years of DXpeditions we have 3434 individual loggings of 1287 distinct stations from 81 countries. In 2017 alone we had 563 total loggings, 127 of which were new logs, from a total of 40 countries, of which 6 were new.

Each year's LBI-DXP has yielded very different results due to atmospheric conditions. Propagation at LBI-1 in 2002 (a one-night stand) was very auroral, so few trans-atlantic stations were heard. However Caribbean, southern US and Latin American logs abounded (including one from Panama). In 2003, the DXpedition expanded to two nights (Friday through Sunday), no TA's came in, and we were again limited to stations in the western hemisphere (including four different RJR frequencies from Jamaica). LBI-3 was the real breakout year - lots of strong European higher latitude TA receptions, and a tentative logging of Iran. The 2005 DXpedition also yielded numerous trans-atlantic stations including lower-latitude Europeans, Djibouti, United Arab Emirates, and a tentative Albania. With the introduction of software-defined radios (SDR's) in 2007 the weekend became more like a data-gathering expedition, with the analysis of audio and computer recordings extending for weeks (or months) after the actual event. By 2015 several members began arriving on Thursday making for a three-night event, allowing more time to DX and experiment with the antenna setups. With the reduction in the number of international medium wave broadcasters, we have expanded our DX target focus - for example, FM DXing has become a staple of the weekend and we started to target digital GPS-enhanced longwave beacons. See the logs at http://www.radiodxing.com from each year for more details on what was heard.

We enjoy the camaraderie and opportunities for sharing knowledge that comes from spending a weekend together each year dedicated to the hobby of medium-wave DXing, and look forward to future years LBI-DXP.